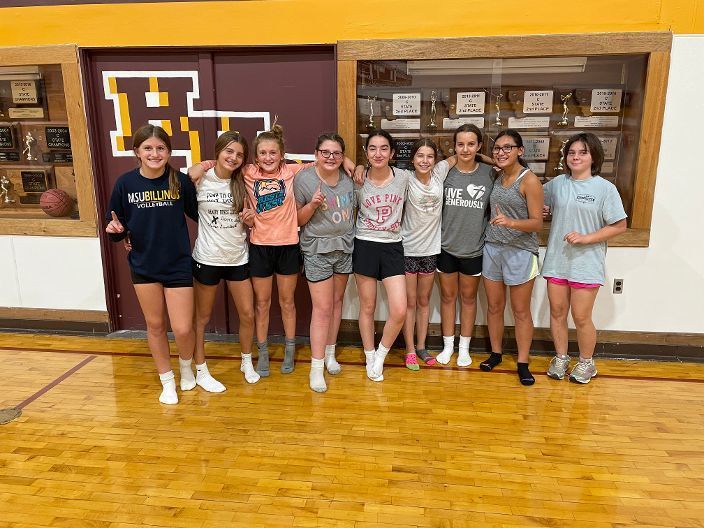 Junior High Volleyball – Off to Defend Title at Districts
Here they are, folks. Check the top photo posted below that features most of the
members of the Harlowton-Ryegate-Judith Gap Lady Engineers Junior High Volleyball
team, just prior to their final practice before they depart tomorrow morning headed to
Hobson for their 2022 District Volleyball Tournament. They are a joyous, friendly bunch,
but boy can they bring out the daggers of competitiveness when they hit the court.
This year they will arrive for the tournament as defending District Champs. Reports are
that they are revved up and ready to take on all comers to work through the 7-team
bracket and bring home again the trophy the team so proudly hoisted last year. They
certainly have a winning pedigree, with many of this year’s members having been a part
of the winning 2021 team.
Here’s the lineup, and they all contribute in a variety of ways to the success of the team.
Coaches Amber Clements and Tonya Briscoe have made sure of that.
Representing the 8th grade class are: Addison Gaugler, Hannah Murnion, Hayden
Murnion, Mikayla Clements, and Saqqara Lapp.
The 7th graders are: Azaria Davis, Reese Cooney, Eva Mitchell, and Jayda Fox.
The two 6thgraders are Cheyenne Clements and Ronilynn LaFountain, making their
classmates proud with strong play and awesome attitudes as the youngest members of
the team.
If you have seen this team in action, you were likely to have been greatly impressed.
They play with a rhythm, confidence, and intensity that belie the smiles they are flashing
in the team photo below, and they combine to make for some enjoyable – often thrilling
–volleyball for spectators to cheer. Coach Clements praised her squad, saying, “We
have 11 girls and they are scrappy and willing to dig deep to get a win.”
The fact of the matter is that they serve, dig, dive, and set with impressive skill—and fly
about sometimes with abandon that will make a mama cringe.
They even sneak in a spike or two once in awhile, which sounds like hyperbole but
being a witness I can attest it is not an exaggeration at all. Perhaps the most notable
part of their game is the pinpoint accuracy of their ball placement – especially when a
player finds that special balance of timing and power that can get them on a dominating
service roll.
They play their first game at noon on Friday (10/7) as the fifth seed, versus the fourth
seed, Melstone. This is such an easy team to root for, and I know there will be a good
contingent of their fans who make the trip north on what is slated to be a beautiful day.
Here’s hoping for a beautiful outcome for these Lady Engineers as they aim to go back-
to-back as District Champs!

--Reported by Dan Edwards, Editor/Reporter for WGV Gazette.
Note: The very last photo on bottom right shows some familiar faces from this year’s
team, celebrating their championship run in 2021.